According to a recent report by Zillow’s Chief Economist Dr. Stan Humphries, first quarter Real Estate Market Reports, median home values, as measured by the Zillow Home Value Index, fell 3 percent during the first three months of the year. This decline was large enough to cause Zillow to push back its forecast. Previously, we anticipated a bottom in home values by the end of 2011. But with values falling by about 1 percent per month so far, it’s unlikely that will happen. We now believe a bottom will come in 2012, at the earliest.


The continued falling home values have caused more homeowners to slip into negative equity. By the end of the first quarter, 28.4 percent of single-family homeowners with mortgages were underwater, up from 27 percent in the fourth quarter of 2010. Read the entire Zillow report here.


One consequence of the underwater mortgage situation is that homeowners who otherwise would have tried to sell their homes in order to move on with life now feel trapped by the negative equity in their homes. Many have made the mistake of thinking that they could ride out this recession and that value would return quickly. Not true, with home values slated to continue to slide, waiting is actually a very bad option that is likely to make matters worse.


Right now, in my market area, we are actually suffering from a lack of available housing inventory to show potential buyers. That is particularly true in the mid-price market of $200-400,000. These have always been a sweet spot in the market. They represent “move-up” homes for most buyers, but too many buyers have been afraid of job losses and too many sellers are too far underwater to be able toe sell. So, we have a stagnant market in that price range.


Most of our market activity is taking place on the low end (mainly in distressed home sales) or at the luxury end. Much of our market has also become a cash market, with mortgage money still tight and with lots of investors roaming around looking for bargains on the distressed market. Even the low end has taken a recent hit as many inexpensive foreclosed homes were pulled from the market due to being involved in the MERS mess. In Michigan MERS-initiated foreclosure processes were declared to be void by an Appellate Court, so now we have to await a Michigan Supreme Court decision to clear things up.


So, right now, we have a disgruntled bunch of Boomers who feel trapped in their underwater McMansions and a younger middle class who are still cowering in their starter homes, afraid to take the risk of moving up to a larger home mortgage obligation. We have a market that continues to decline in value and a foreclosure mess caused by MERS that has stalled that portion of the market. And of course we have the government types running around trying to make everything harder for everyone by suggesting that we do away with the Mortgage Interest Deduction and make everyone pay 20% down in order to get a mortgage. Sounds like a scenario out of Dante’s writings doesn’t it?
Posted by Norm Werner at 7:44 AM No comments:

May seems to be off to a slow start…

I know that this is only an anecdotal observation, but May seems to be off to a very slow start this year, so far as home sales go. That could well be attributed to the terrible (and at times cold) rainy weather that we’ve had. It certainly hasn’t been all that good for open houses so far this month.

For six of the nine markets that I track this year I have multiyear data, which at least lets me look back at a fairly gross level at year-to-year comparisons.

The numbers would seem to indicate that Commerce and Highland are on about the same track as last year with Brighton actually ahead of the pace of 2010. My home market of Milford, along with Lyon/South Lyon and White Lake are lagging the 2010 pace for home ales in May right now.

Some of this might be attributed to the lower inventory levels this year and the temporary slowdown in foreclosure sales as the industry tries to sort out the MERS mess in our state. MERS is the holding company created by the banks to provide a holding company (some would say dumping ground) for their bad loans. MERS was the entity that foreclosed on many people and now the Michigan Appeals Court has ruled that it did not have standing to initiate those foreclosures, so it nullified them. Chaos has ensued has lenders and buyer alike scramble to figure out if the foreclosures that MERS was involved with will have to be redone. The Appeals Court decision is being appealed.

So whether it’s the weather or confusion over foreclosures, something seems to be holding back the market a bit here in the start of what should be our best selling season.
Posted by Norm Werner at 7:40 AM No comments:

The month of April 2011 was perhaps a tuning point in the process of recovery in the Southeastern Michigan real estate market. The results for April, 2011, in six local markets that I have been tracking for over a year are shown below, along with up-to-date Altos Research charts of the median sales prices and inventory for those markets. If you looked at the numbers by themselves you would not see the turnaround in four of the six markets.


The Altos Research chart for Milford – 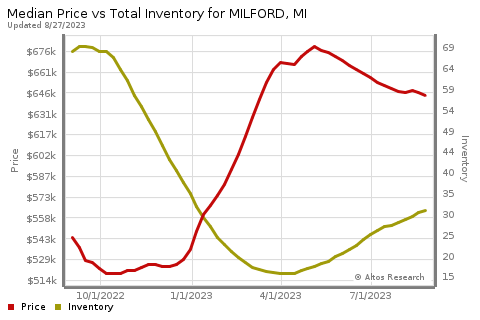 Let's hope that was an inflection point in April and that the Milford Market has turned the corner. Distressed sales are well below 50% and the $/Sq Ft and the SEV multiplier numbers are the strongest in the area. Of course some of that is due to stubbornness on the part of sellers who refuse to drop prices to sell. That's why this is such a small market right now.


The Altos Research chart for Highland – 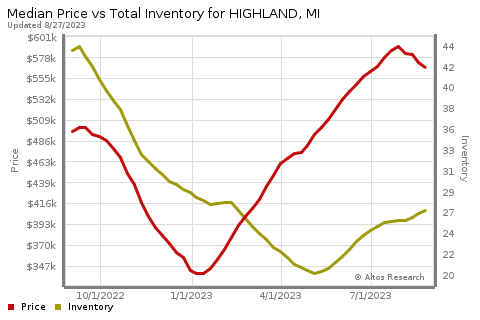 Highland (along with White Lake) continues it's role as a poster child of the bad market. Distressed Sales still made up over 50% of total sales, although the $/Sq Ft statistic was up in April.


The Altos Research chart for Commerce – 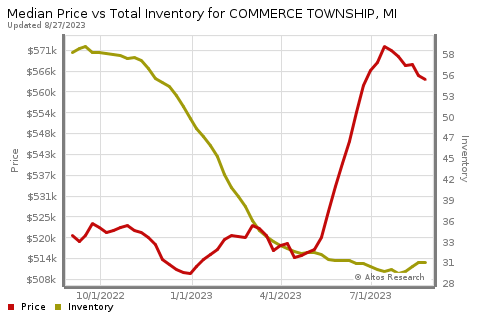 Commerce continues to be a roller-coaster ride for would be sellers, but it is currently on an uptick, both in sold Median Prices and Inventory levels. Hopefully that is a harbinger of a better summer selling season; although Distressed Sales still make up too much of this market. 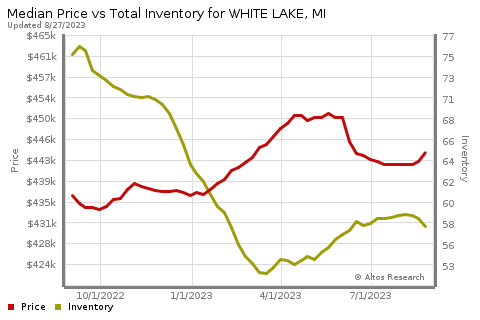 The chart shows White Lake to be a market that is still in serious distress. After and end of year recovery of sorts last year, things have been consistently down in 2011. That is consistent with the numbers for SEV multiplier and the $/Sq Ft. 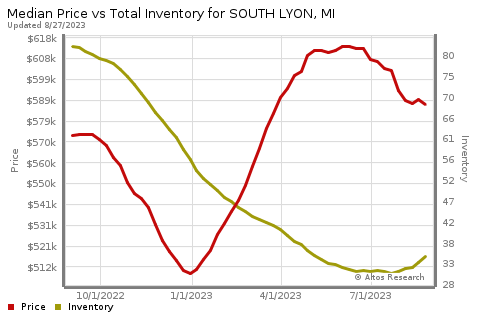 Inventory is headed up while Median Sold Prices are falling, an indication that all is still not well in this market.


The Altos Research chart for Brighton – 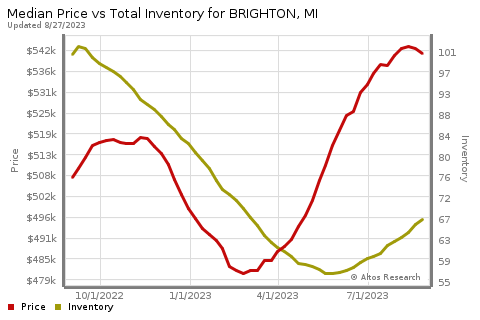 The Brighton Market is one of the few in the area that is headed in the right direction, with both median sold prices and inventory headed up.
Posted by Norm Werner at 7:45 AM No comments:

There were 17 homes that sold for more than $20,000 in Milford, Michigan in April, 2011. Of those 35% were distressed sales – either foreclosures or short sales.


In general, home sold for 1.9174 times their State Equalized Value, which is supposed to represent ½ of the assessed value.


On average the sales prices were 93% of the asking prices in Milford.


So, we’re making progress in Milford in getting out of the real estate market malaise. For all of the data on the Milford market, as well as 8 other surrounding markets, go to my Web site – http://www.movetomilford.com/ and click on the What has sold locally choice.


Here’s a chart from Altos Research which shows the trends for home sale median values and the inventory level in the Milford market.

You can see that late March and most of April were back into positive trends. Perhaps we've seen the inflection point for theis market and not even recognized it at the time.
Posted by Norm Werner at 7:32 AM No comments: