I'm holding 730 Milford Glen open on Sunday, October 22, from 1 - 4 PM. Come out and see this wonderful 3 bedroom, 2.5 bath Cape Cod in the heart of the Village of Milford. This home features a very had to find first floor master suite, with huge walk-in closet and bib master bath with separate tun and shower and dual vanity sinks. The open floor plan on the entry level is sure to please. The kitchen features an island and granite tops. I'll have fresh cookies for visitors, so come on out. 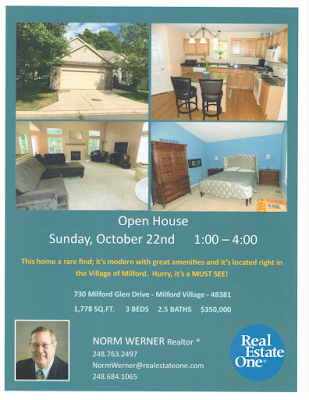 Posted by Norm Werner at 7:51 AM No comments:

What are stigmas in real estate?

The word stigma is defined at its most generic level as a mark of shame or disgrace. In the real estate industry there is the concept that a property can become stigmatized; that is that a stigma of some sort becomes associated with it which impacts its value in a negative way. The association of a stigma with a property may be caused by some very real circumstance or physical attribute; or, it may be some totally imagined cause (such as the house being haunted).

Many stigmas in real estate are caused by the association of the property with some event, perhaps a death in the house. Deaths in the house are the most usual the source of the rumors of the house being haunted. If the deaths were judged to have been murders the stigma associated with the property can become even stronger, especially if the person who was killed was well-known or even famous. People who are superstitious tend to avoid homes with death stigmas associated with them, even if those deaths are only rumored or urban legends.

Haunted house stigmas may add to the appeal for some, but mostly they just scare off superstitious

would-be buyers. Anything that reduced the pool of potential buyers is having a negative impact on the value of the property.  Since there is no way to prove or disprove this stigma, it is one of the harder one’s to argue against. People either believe or don’t believe in the concepts of ghosts and haunting.

Some stigmas are caused by very real circumstances. Homes located next to power substations or gas pipelines and substations carry with them the stigma of fears about dangers from explosions or lightning strikes. While there have been very few cases of such things happening, they have happened often enough, and with enough media coverage, to keep the stigma alive. Being next to railroad tracks is another very real, location-based stigma. Those stigmas do have a negative impact on the values of the real estate properties that are located around them.  Not everyone is frightened off by those stigmas, but enough people are dissuaded to impact the values negatively.

Stigmas may be caused by the actions of the sellers of properties. Sellers who hold out too long at a price above the market may find that they’ve created an imagined stigma in the minds of potential buyers of “what’s wrong with that house that it won’t sell?” That same thing can happen if the price of a property is suddenly dropped by a large amount. Would be buyer may associate such a reduction  The same thing happens if the property is taken off the market and listed as Pending and then comes back on the market. If the deal fell through because the buyer couldn't get his mortgage through no fault of the property, the seller should make sure that his/her agent clearly states the reason for the failure of the sale in the re-listing of the property. If it was some fault with the property that caused the buyer to bolt, the seller needs to fix the issue and have his agent clearly explain things to new buyer agents.
as an indication that there is a problem with the property – a stigma.

Most stigmas do not stand up well to logical analysis of the situation; but, then, logic does not always carry the day when it comes to people and why they would buy or not buy something. The power and gas industries go to great lengths to insure the safety of their installations and there is little evidence that would support the fears of catastrophic events taking place because of them.  However, there is no denying that they can’t be completely hidden and that just the fact that, in most cases, their industrial appearances detract from the look of the surrounding area may impact the value of those surrounding properties. They cause a stigma on the surrounding properties.

What should you do if your house is associated with a stigma? You can try to provide as much information as possible to disprove or at least mitigate the stigma; or, you can just accept the fact that

the stigma, fairly or unfairly, will have an impact on your property’s value and move on. The stigma will probably reduce the pool of potential buyers by some amount, but that does not mean that no one will buy it. If it is an imagined stigma, like the property being haunted, the pool of remaining buyers will probably be non-believers in such things anyway and the value impact may be small or none at all. If it is a stigma associated with something physical, such as being next to a gas pipeline right of way, pumping station or control station; or, next to a power distribution substation, there is little that you can do. If those things were there when you got there, try to remember why you ignored them and bought anyway. You may have some success working with the company involved to use landscaping to hide the facility as best as they can.

Stigmas don’t totally destroy property values, but they usually do have a negative impact of some magnitude.
Posted by Norm Werner at 3:09 PM 1 comment: