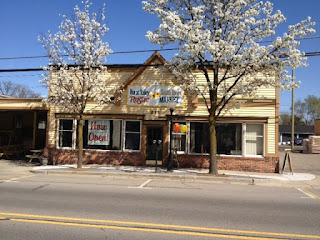 Today the South Town Market opened at 211 S. Main St in Milford and its opening is significant for several reasons.
First, it is a new business in what is referred to as "South Milford" the business district that is south of the Huron River. Ironically this are was the original business district for the Village of Milford, before the district shifted primarily to the north side of the river sometime in the mid 1800s.
In the second place it opened in the building that used to house the old Colonial Motors, which was a Milford institution for many many years; but, which failed in the recent recession, leaving a big empty space in South Milford.
Third, it is the entrepreneurial brainchild of Lisa Detkowski and her husband and houses a bunch of independent small merchants, giving each a space in which to do business. It truly is an incubator for several small start-ups. The focus is on locally made products, moistly foods right now, but scheduled to expand into many other areas. 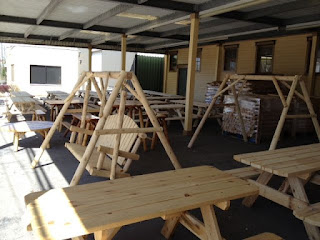 In addition to the various displays of local food stuffs inside there is the Huron Valley Rustics furniture display, both inside and out. Lisa’s husband makes the furniture on-site in a rear work area, so you can’t get any more local than that. Check out the various pieces of “rustic” lawn furniture on display.
I wish the Detkowskis luck in their new venture and encourage everyone to plan to visit soon and often. Lisa says many more local artisans are lined up to bring their wares in soon. She is also planning a tasting bar for the specialty teas and baked goods that will be sold in the South Town Market. Check it out – Recommended!

For more on the South Town Market go to their Web site www.SouthTownMarket.com  or call Lisa Detkowski, the Marketing Director, at 248-714-5503, for information about how to get your local products into Milford's South Town Market.
Posted by Norm Werner at 5:52 PM No comments:

As a Realtor I get the old “How’s the market?” question all the time. I’ve lately resorted to replying that “it’s all over the place.” I only track eight, relatively small markets, each comprised of the properties in a single township (there are some villages and small cities that are encompassed by the townships), and I see everything from a booming market in one township to a still depressed market in another and everything in between. Even the things that I want to classify as consistent across those markets are not really consistent.


South Lyon is a booming market, while Highland and White Lake are still both in the dumpster with still declining property values and a high percentage of distressed sales in their mix. The Milford and Brighton Markets (which really encompasses Green Oak and Hartland) are doing OK, but still show a higher percentage of distressed sales that is healthy. West Bloomfield is still experiencing a high level of distressed sales and lower sales overall that last year. The Commerce market is sort of transitional market between the higher density of West Bloomfield and the more rural feel of Milford (et. al.) to the west. Commerce is doing OK; but, sale volume is lower than last year and Commerce still has a higher rate of distressed sales than some of the better outlying suburbs.
One thing that I can say with certainty is that now is the tie to jump in and test the market, if you’ve been waiting for things to turn around. The value that has been lost isn’t going to come back quickly; however, values have stabilized and started back and there is a shortage of listed homes right now, so buyers are bidding up prices. Waiting isn’t going to significantly increase what you can get for your house, but it may become harder to sell when more homes are listed; so get in now.
Posted by Norm Werner at 5:18 PM No comments:

I've finally gotten all of the apps that I've been using on Windows XP installed on my new Windows 7 laptop and that required that I buy new 64-bit versions of some of them. I also discovered that about half of the printers that I used to be able to get to don't have Windows 7 drivers, so they are out of the mix. The hardware industry has got to love Microsoft for forcing hardware upgrades in other areas, such as printers, too.

Getting data over was relatively easy, using a large external disk as the go-between from system-to-system; except for old emails from Outlook Express. Getting them over and into Windows Live Mail is still a work in progress, it is do-able, but the process requires a lot of manual intervention, since the folder structure from OE doesn't quite come across.

There are also surprises galore when trying to use the new Office 2010 apps against the old Office 2004 data files. I'm not sure if the pain would have been less had I not skipped the Vista experience. The basic problem is that the apps people, in their enthusiasm to add new features sometimes obscure or remove the old features that I was used to seeing and using. I'm having a dickens of a time figuring out how to get the stuff that I do every month in Excel done on the new 2010 version. I can find most of the features that I used to use, but it takes a long while of sloughing through their new Excel interface to find them. My files from the old XP versions don't come over cleanly either. I'm not sure if there's a translation step that I'm missing, but it is frustrating right now.

I'm sure that once I get through this painful transition phase that I'll start to appreciate some of the new features; however, many of them I just don't need or want getting in my way. For now, in order to get stuff done; I've gone back to my old XP laptop. I can't let this upgrade just stop what needs to get done. So, for now anyway; the new machine is for testing and learning (when I get time) and the trusty old XP machine is for getting real work done.
Posted by Norm Werner at 9:50 AM No comments:

I got a new laptop computer a couple of days ago - a new, state-of-the-art, whiz-bang laptop with the latest Windows 7 operating system on it. I had held off as long as I could. Even though my old Windows-XP based laptop was still runing good, it was starting to show its age, especially on newer, more memory intensive apps. It had 1.5 GB of memory, which was a lot when I got it, but which pales next to the 8 GB of the new machine.
So, I've spent the last two days discovering which of my old apps will still run on theis new machien and which I have to buy again. Since this is a 64-bit machine, there are many old drivers and apps that just won't move over and run. At least it came with a stripped down version of MS Office on it.That wold have been another major $ hit to replicate.

Just moving all of the data from one machine to the other can be a fun challenge. And then there's the email and Internet bookmarks stuff. Bookmarks proved much easier to move that I had imaged; however, moving email files between my old Outlook Express environment to the new Microsoft Live Mail environment has proved to be a big challenge. Most other apps have Windows 7 versions, even if I have to pay for a license again.

Adding printers has been interesting, too. Fortunately I had upgraded my home print environment to a new HP OfficeJet Pro 8600 a couple of months back, so that worked out well. The offices that I work in during the week proved to be a different challenge, since they both have lots of older printers that don't have Windows7 drivers. I was able to find enough updated drivers for both sites to keep me going.

In addition to figuring out how to get all of te apps that I use regularly to work, I'm still trying to learn how the new MS Office 2010 apps all work under Windows7. What fun it is to upgrade when you've skipped a generation or two of Windows. I'll let you know how it's going from time to time.
Posted by Norm Werner at 4:10 PM No comments:

The Cabin Fever Sale that the Milford Historical Society will be running tomorrow Friday, March 9, from 9 am until 4 pm and Saturday March 10, from 9 am until 2 pm will also have a preview sale today Thursday, March 8, from 4 pm until 6 pm. The sale is set up at 210 S. Main St in the old stone blacksmith shop across from the now defunct Colonial Motors location onthe south end of the Village.

There will be lots of stuff from estate sales - furniture, jewelry, collectibles and more - all priced to sell quickly. Check it out. It's for a good cause and, who knows, you may find that treasure that you've been looking for.

For more pictures and details on the sale go to http://www.milfordhistory.org/ and click on the Cabin Fever ad.
Posted by Norm Werner at 8:33 AM No comments:

I've been consumed by a big project lately and haven't taken the time to post here for a while (about a month). It's time to fix that.

The Milford Historical Society, for which I am the Secretary this year, is putting on a late-winter Cabin Fever Sale this coming week - March 9 and 10 - in Milford at the old stone blacksmiths shop at 210 S. Main St. That's just north of the State Farm office and across the street from the old Colonial Motors (now defunct) location.

The sale will feature lots of estate items from vintage furniture to vintage jewelry and lots of collectible figurines and pictures.

For pictures of some of the merchandise go to http://www.milfordhistory.org/cabin_fever_sale.html

The sale will raise money to allow the Milford Historical SOciety to carry on it's educational mission of collecting, preserving and sharing the history of Milford. I hope you can go check out the sale.
Posted by Norm Werner at 8:06 PM No comments: